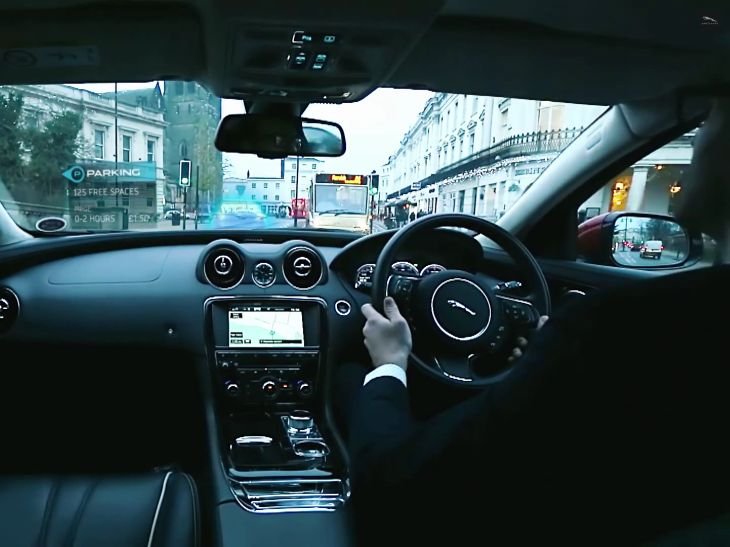 Augmented reality has been seen in cars for the first time as part of Jaguar Land Rover’s new 360 Virtual Urban Windscreen research.

The car manufacturer has developed a new concept that completely reinvents traditional GPS navigation by projecting a ghost car in front of the driver to follow. The idea is to keep a driver’s eyes on the road and avoid the distractions that come with dash-mounted hardware.

Jaguar Land Rover has made the whole solution even more effective by implementing transparent pillars for an uninterrupted view. It works by embedding a screen in the surface of each pillar that shows live video from the car’s external cameras.

Either or both of the left and right-hand pillars can be automatically activated if a driver uses the vehicles indicator to change direction, moves their head to look over their shoulder for an overtake manoeuvre or approaches a junction.

The system’s external cameras help to identify pedestrians or cyclists that might be at risk with a halo warning, while the head-up display (HUD) can provide drivers with other information that is relevant to their journey.

A video demonstrating the technology shows how Jaguar Land Rover offers figures on free spaces at a passing car park. The company says it can also use the HUD to give details on petrol station prices and advise drivers to turn at visible landmarks rather than road signs.

Infographics could be a distraction

Connected Car raised concerns with Jaguar Land Rover that the extra information being added to the outside world might itself be a distraction to the driver, with them paying more attention to petrol station information than oncoming traffic for example.

A spokesperson responded, saying that the next step for the research team is to understand which elements improve a driver’s experience in the car and what aspects may require further work from the company.

There was no mention of when the technology will make it into production vehicles. At present the manufacturer is simply using the video to test ideas with customers.